The Rising Dollar and the Market’s Decline.

Last May in The WSJ, I noted that despite commodity inflation, supply-side guru Robert Mundell predicted “a return to recession later this year when QE2 ends and the dollar begins its inevitable rise. Deflation, not inflation, should be the greater concern.”

Mundell has since noted he sees little threat of substantial US inflation because M1 money velocity has collapsed by half and is likely to stay down. 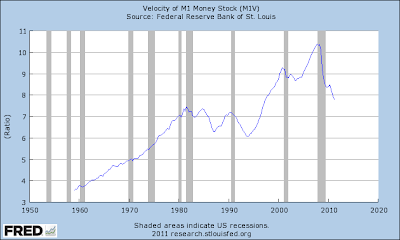 In the Journal article, I wondered how Mundell could be concerned with deflation when commodities including gold and oil were rising sharply, and explained his answer came from the exchange rate between the dollar and the euro, which Mundell calls “the most important price in the world.”

According to Mundell, the financial crisis of 2008 was set off by the dollar’s rapid fall versus the euro from summer 2007 to spring 2008, followed that summer by an historic 30% dollar rise within three months, the largest major currency appreciation in peacetime history. (The dollar’s rise is represented by the steep decline in the euro:) 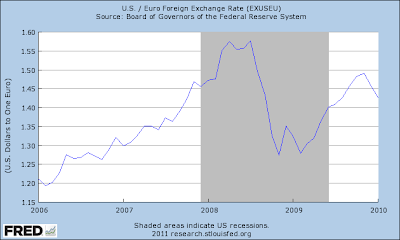 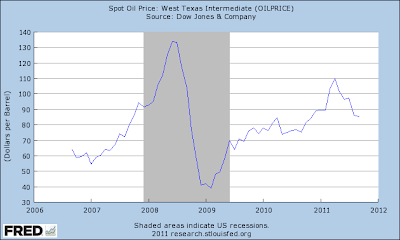 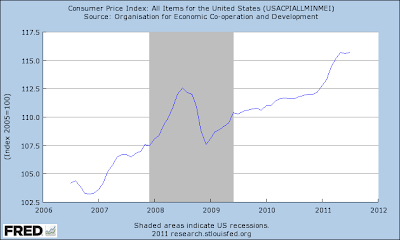 This rapid dollar appreciation caused liquidity to become tight in the midst of the subprime mortgage solvency crisis, freezing the financial system and causing the near-systemic failure.

Despite radical actions by US monetary authorities in the years since, in Mundell’s view, the gravitational pull on the dollar has been back to its strong position versus the euro.

In winter 2009, the Fed initiated its first quantitative easing program (QE1), which pushed the euro/dollar rate down, easing the liquidity crisis. When it ended in late 2009, the dollar rose sharply again, weakening the recovery. QE2 was initiated in summer 2010 and the dollar declined again, improving prospects for recovery. 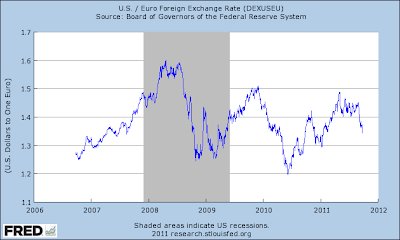 Now, QE2 has ended, and there is talk of monetary easing from the ECB. These factors, perhaps combined with Europe’s mounting debt crisis, have pushed the dollar up versus the euro, with the euro falling from $1.45 in late August to $1.31 yesterday, a decline of about 10% in one month: 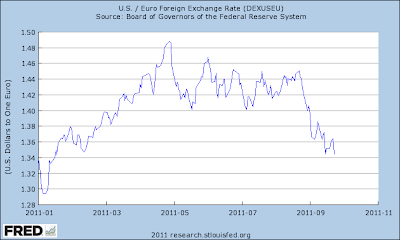 Confirming the stronger dollar, commodities have sold off impressively in recent weeks. Gold is down about $250 since its September high above $1,900:

While a rising dollar is usually a bullish signal, it may be that the Dow’s recent decline is due to investor memories of the last two dollar surges which coincided with tighter money, debt crisis, and contractionary pressures. Today’s market weakness may be due as much to worry about a soaring dollar as to other factors.

Time will tell, but so far Mundell’s unconventional analysis is holding up. Exchange rates — the relative value between major currencies — are as important as the absolute value signaled by gold in any discussion of stable money.

PrevPreviousThe WSJ and NY Sun critique the China tariff bill; Domitrovic on bipartisan spending cuts; Taylor and Cogan say stimulus is bad for politicians.
NextWeekend edition: Lewis and The WSJ on the euro; Kudlow on the President’s populism; O’Driscoll on financial bubbles.Next