The WSJ notes the world’s increasing dissatisfaction with the falling dollar.

From Forbes, Louis Woodhill worries the U.S. will raise taxes to fight the deficit and offers a smart counterfactual.

On The Kudlow Report, David Goldman explains that while large businesses are doing better, small businesses and consumers are getting squeezed:

At TGSN, Ralph Benko quotes Keynes from 1922 on the need for Europe to re-embrace gold:

If gold standards could be reintroduced throughout Europe, we all agree that this would promote, as nothing else can, the revival not only of trade and production, but of international credit and the movement of capital to where it is needed most. One of the greatest elements of uncertainty would be lifted. One of the most vital parts of pre-war organization would be restored. And one of the most subtle temptations to improvident national finance would be removed; for if a national currency had once been stabilized on gold basis, it would be harder (because so much more openly disgraceful) for a Finance Minister so to act as to destroy this gold basis.

At The Big Questions, Steve Lansburg suggests increased government consumption means a commensurate drop in consumption other parts of the economy. 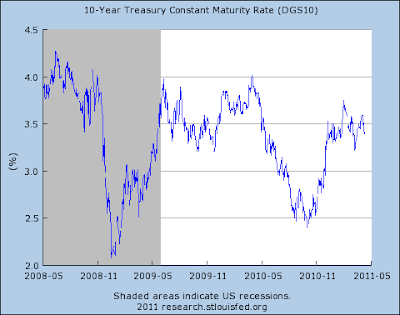 There’s an interesting parallel between the 10-Year Treasury and the euro/dollar exchange rate:

PrevPreviousWednesday round up: Tamny and The Sun on gold; Kudlow is pessimistic on a budget deal; Wesbury on the end of QE2.
NextWeekend items: Lewis on balancing spending cuts; Tamny on Japan’s deflation; Perry on tax rates vs. revenues from the top 1%.Next