Weekend items: Lewis on balancing spending cuts; Tamny on Japan’s deflation; Perry on tax rates vs. revenues from the top 1%.

At Forbes, Nathan Lewis argues that tax rate cuts are necessary to offset the economic pain of large spending reductions.

From New World Economics, Lewis provides the new Russia chapter to his excellent book, Gold: The Once and Future Money.

On Forbes, John Tamny explains the roots of Japan’s deflation.

At Carpe Diem, University of Michigan’s Mark Perry charts tax rates vs. revenue from the top 1%: 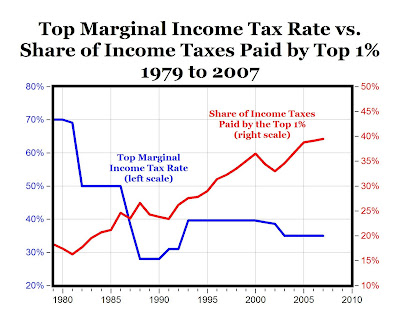 In The Washington Post, AEI’s Arthur Brooks challenges the morality of raising taxes on the wealthy.

From The WSJ, John B. Taylor argues the President’s budget proposals would entrench spending at a much higher baseline.

On Forbes, Peter Ferrara recounts the enormous size of the American welfare state.

The Heritage Foundation features a brief interview on tax issues with Art Laffer:

My idea of tax reform is for Congress to enact a true flat tax, a la Jerry Brown’s proposal in 1992. Congress should replace all federal taxes (except sin taxes, which are really designed to change behavior rather than raise revenue) with two flat-rate taxes, one on personal income and one on business net sales. This tax code would remove loopholes and almost all deductions, and the static revenue neutral rate would be less than 12 percent. Can you imagine what would happen to the United States economy if there were just two flat rate taxes of 12 percent?

On TGSN, Ralph Benko cites a book on rising living standards under the gold standard.

At NRO, Mark Steyn predicts the end of the dollar era.

Geithner last year flatly denied he is pursuing a policy aimed at cheapening the dollar. “We will never use our currency as a tool to gain competitive advantage,” he told reporters last November after a meeting in Kyoto, Japan, of finance ministers from the Asia-Pacific Economic Cooperation group. “I’m happy to reaffirm again that a strong dollar’s in our interest as a country.”

From Townhall, Mark Baisley describes a conversation on the Laffer Curve with the late-Sen. Edward Kennedy (MA).