Wednesday update: The WSJ on Canada’s conservatives; Rasmussen on Ryan’s budget; Goldman on the marker sell off.

The WSJ applauds the conservative victory in Canada.

Enter the Harper government in 2006. It made tax cuts, a strong national defense and rationalizing government its priorities. And it made good on those promises. On January 1, 2008 Canada’s general sales tax fell to 5% from 7%. Mr. Harper has also cut the federal corporate tax rate, which is now 16.5% and is scheduled to fall to 15% in 2012. (Add in provincial corporate rates of about 10%.) The U.S. federal rate alone is 35%.

Canada avoided America’s housing mania and meltdown, but as our biggest trading partner it shared some of our economic pain. Conservative policy—low taxes and a willingness to allow the exploitation of rich oil and mineral deposits—has been a life saver for a small economy heavily integrated with the U.S. Its GDP grew by 3.3% last year, compared to America’s 2.9%, and it now takes $1.05 to buy a Canadian dollar.

On The Kudlow Report, David Goldman discusses the market sell off:

At NRO, Ramesh Ponnuru reports Gov. Mitch Daniels (IN) refusal to accept that tax cuts are a solution to the deficit.

From The Washington Times, Richard Rahn says tax hikes will slow growth and worsen the deficit.
On Forbes, Bill Frezza predicts rising inflation will lead to a return to the gold standard.

At RCM, Brian Wesbury suggests the Bernanke Fed has caused commodity inflation but is still mostly impervious to political oversight.

On COAL, Paul Krugman argues the dollar’s decline is not a problem: 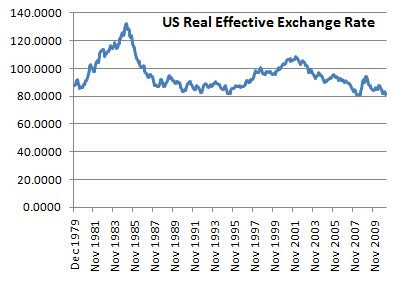 On Human Events, Newt Gingrich advocates that Washington focus on jobs and prosperity.

From The Daily Caller, Ike Brannon argues the Ryan plan’s most significant benefit is its tax reforms.

The WSJ reports Mexico has bought 100 tons of gold.

From the Center for Financial Privacy and Human Rights, J. Bradley Jansen mentions Robert Mundell in discussing a transition to sound money.