From Forbes, Nathan Lewis explains the simplicity of gold-linked currency.

On The Kudlow Report, James Pethokoukis discusses the debt ceiling:

From Forbes, Reuven Brenner cites foreign examples of how to assess the US budget deficit, and cites the need to increase entrepreneurship.

The WSJ highlights a Kauffman Foundation study on how to stimulate more new businesses:

The Kauffman Foundation proposes a “startup act” to make it easier for new companies to survive and contribute to long-term growth. One key is making ieasier to access the capital markets, at a lower cost, at early stages of business formation. Messrs. Schramm and Litan want to permanently waive any capital gains taxation for long-held investments in startups over their early years. (We prefer a zero capital gains tax on all investments, but this is a start.)

Another good idea is an unlimited annual supply of an “entrepreneurs visa” available to any immigrant who wanted to come to the U.S. to start a business, with a particular focus on newcomers with expertise in engineering, science and technology. Still another proposal is regulatory reform. To “cleanse the books of inefficient and costly rules,” any regulation that took more than $100 million from the private economy would lapse automatically after a decade.

Reason TV lauds monetarist Milton Friedman on the anniversary of his birthday.

From ABC’s This Week, Keynesian Paul Krugman explains his view of why the economy is weak and how spending cuts will make it worse. (Part 2, here.)

At COAL, Krugman argues most of the recent deficit surge stems from the recession: 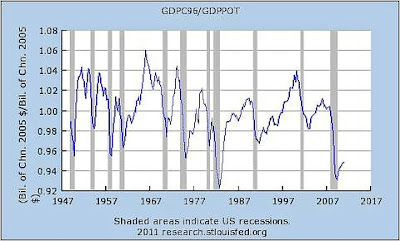 The Huffington Post, Keynesian Jared Bernstein notes the rise of wage inequality since the early 1980s.