Weekend round up: Lewis on gold linked currency; Mundell says gold could play a role in monetary reform; Lowry admonishes the GOP to focus on growth.

The new book to buy – ‘It Shines for All’: The Gold Standard Editorials of The NY Sun.

On Forbes, Nathan Lewis distinguishes between currencies linked to gold vs. backed by gold.

FOX: Now, you’ve written about the role of gold in the world economy, Professor Mundell. Do you think that we’re going to see any kind of return to the gold standard?

MUNDELL: I – nothing like the gold standard that existed before 1914. But there could be a kind of Bretton Woods type of gold standard where the price of gold was fixed for central banks and they could use gold as an asset to trade central banks. The great advantage of that was that gold is it’s nobody’s liability and it can’t be printed. So it has a strength and confidence that people trust. So if you had not just the United States, but the United States and the euro tied together to each other and to gold, gold might be the intermediary, and then with the other important currencies, like the yen and the Chinese yuan and the British pound, all tied together as a kind of new SDR, I think that would be one way the world could move forward toward a better monetary system.

From Forbes, Bret Swanson explains the budget ramifications of 2, 2.5, 3 and 4 percent annual growth: 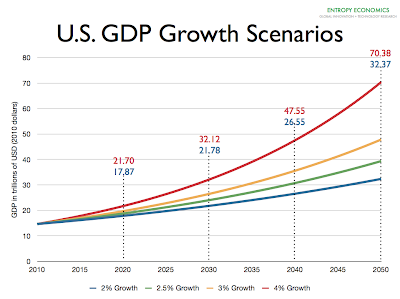 The unemployment rate is still at 9 percent. According to Gallup, 35 percent of people say the economy is their top concern, and 22 percent say jobs. Just 12 percent cite the federal deficit and debt. Republicans have taken the top concern of roughly one-eighth of the public and made it their existential cause. On top of that, they have taken a subset of the debt issue, the long-term fiscal sustainability of Medicare, and made it their calling card.

From last year, Chris Mahoney of Granite Springs Asset Management speculates that China could use its dollar assets to peg the euro to the dollar, and by extension to the yuan.